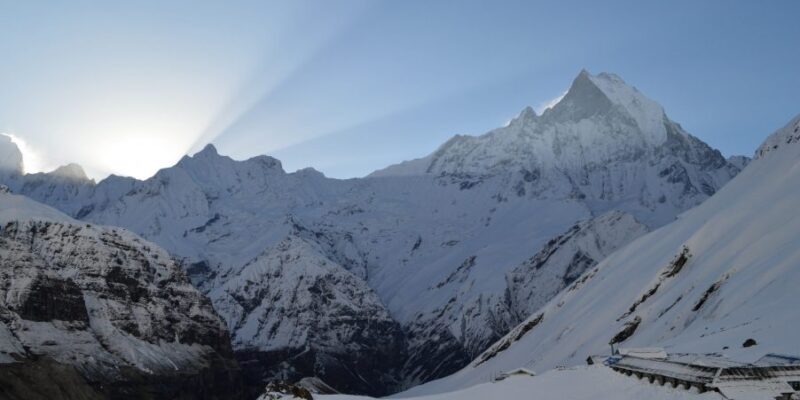 Challenged by the Cold and High Altitude

My notes from trekking the Himalayas continue so no, there was no abrupt end to my adventure. I did not get stuck at 3,239 meters. I carried on but the whole experience became more demanding. From that point I could feel that I am getting easily tired. High altitude and a night spent at a cold lodge were taking its toll. I needed more stops to either have a drink of water or just rest my backpack on a side of a path. I admired the surroundings. The snow-covered Himalayas were a remarkable view that motivated me and excited me at the same time.

Sunrise at the Annapurna Base Camp

There were no more horses or other domestic animals in sight. Only dogs appeared as soon as we approached Machhapuchhre Base Camp. Up there, we were trekking on a thick layer of snow. In places it was very deep and I could spot a stream of water running underneath it so extra caution was needed. When we arrived at the Annapurna Base Camp I was happy, relieved and freezing! The sound of avalanches coming down on the other side of the mountains was also sending some shivers down my spine. The force of nature, I thought.

I managed to make the most of the sun by having my lunch outside the lodge. The supplies were limited up here that was apparent. All the food on offer was basic and more expensive in comparison to other places along the way. Although the dishes looked very plain I still ate with a great appetite. 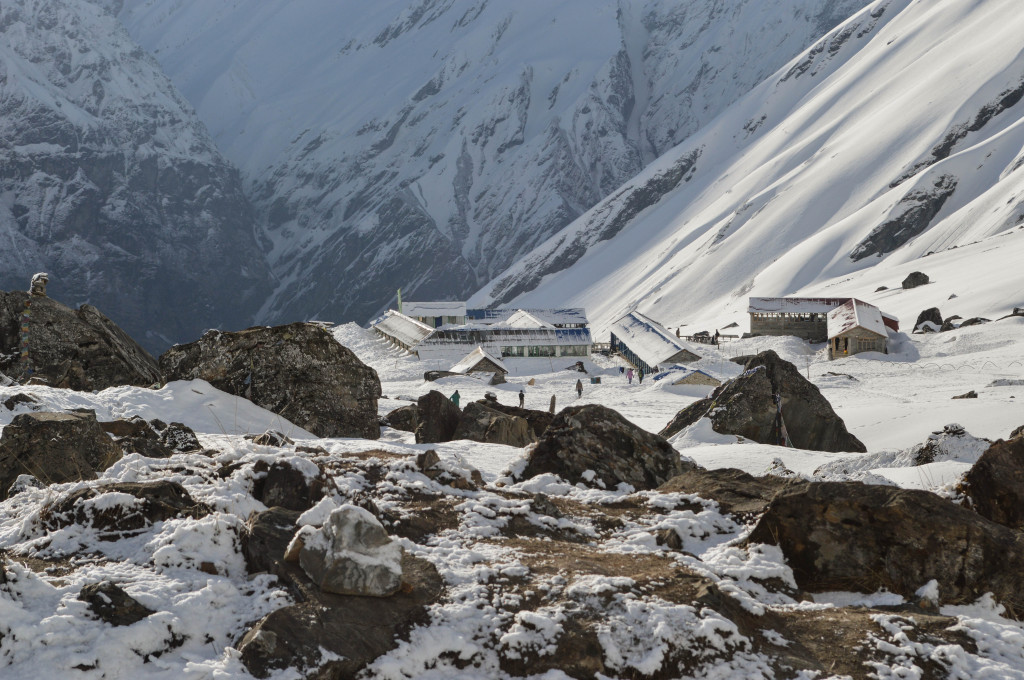 Bracing for the Cold

While the sun was out the thermometer showed around 7 degrees plus. It quickly dropped though to only 2 in a matter of few hours. After spending an hour in the dining room I started to notice a steam coming out of my mouth. I was cold and even putting all of my layers on did not help. Staying at this lodge at ABC meant no heating and no hot water to wash. It was not a crushing disappointment. I was prepared for it.

Except me there was another woman staying at this lodge, Lisa from Hawaii. She trekked few more hours than me and really wanted to take a nap. She was all sleepy and ready to doze off but her guide advised against this idea as it was easy to develop AMS (altitude mountain sickness) this way. It is important to first get used to the hight before resting or going to bed. In order for her to stay awake he decided to keep us entertained and what a comedy act that was! The best of the Las Vegas showman – since he used cards to trick us and pull a joke on Lisa.

As the cold was too much we had to ask for a blanket and before going to bed I had request an additional one. I also got myself talked into trying the Nepalese blanket – eating a chili pepper! I picked a green one from a big plate as I knew that the red one would probably blow my head off. I would be red and dead!

I left the guides and porters to their dinner and more generous than mine serving of chili and went to my room. Already knowing the drill I put double socks, warm leggings, four layers of tops, gloves, hat, scarf plus I had two blankets on top of my sleeping bag… and I was still freezing. Whenever I tried moving a little to warm my feet I was feeling really out of breath and my heart was pounding like crazy. After few hours I finally warmed up and decided to take of my jacket… uh ah… brave move. This simple activity seemed like a mission impossible and I have no idea how long it actually took me to do it.

In the end I do not know how I managed to sleep at all and I was glad to hear a hustle and bustle outside my lodge before 6 o’clock and decided to get up. My guide was up already so we went to look at Annapurna I and leave my prayer flags at the viewing point. The words cannot describe this amazing experience of gazing at these majestic mountains and I will never forget that feeling. 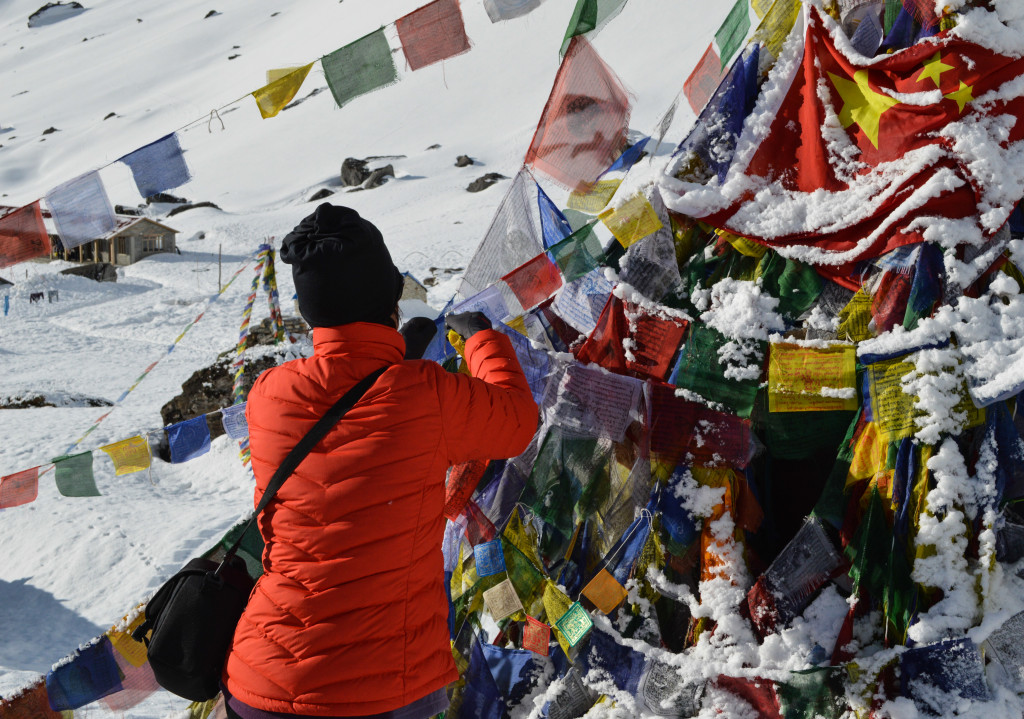 Attaching the prayer flags at ABC 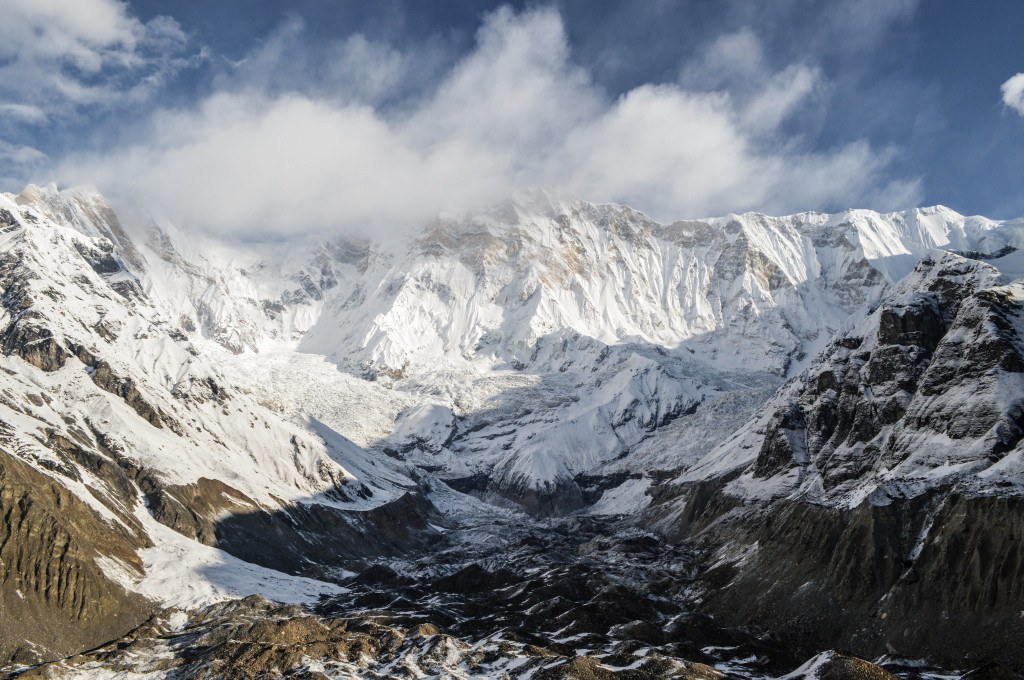 After breakfast we began descending, meeting other people on the way like Henk and Sharon from South Africa or a solo traveller, Thomas from France, who all trekked without a guide or a porter. Hats off! This trek is not a walk in a park.

Towards the end of the day we were caught by not only rain but also hail. I was very determined to make it to Sinuwa and take a hot shower and these weather conditions would not stop me. We decided to stay at a small lodge where I joined some of the locals and other guides to watch Bollywood movies. The expressive nature of these films helps to quickly grasp an understanding of the plot even if you do not speak Hindi and by that time I was ecstatic about making it to the Base Camp so it worked well with my natural high.

I almost forgot how tough this part of the trek was when I was going all the way up. The rain, the sun followed by more showers and even more sun… the heat was on again! As expected I used every single item of clothing I took with me, ranging from a down jacket to breathable t-shirts and some of it to the point that it was not of its first freshness. At the end of the day, as I was saying to the intern who worked with me whenever he asked about my trip – “I do not care if I stink. I am not going to carry all this stuff on my back!” I am not really a role model material as you can see but he did learn few things about digital marketing from me.

We were greeted by another hot day so after a couple of hours of trekking we stopped in Jhinu Danda. We enjoyed the hot springs situated near the river. Oh.. what a bliss! On the way back I had to battle with cows to be able to cross the path back to the main route.

At the Australian Camp I was very pleased with my room, a shower and a toilet. Either the standards were very high in comparison to the other lodges or not a lot was needed to make me happy. It was a nice place to finish my trek. 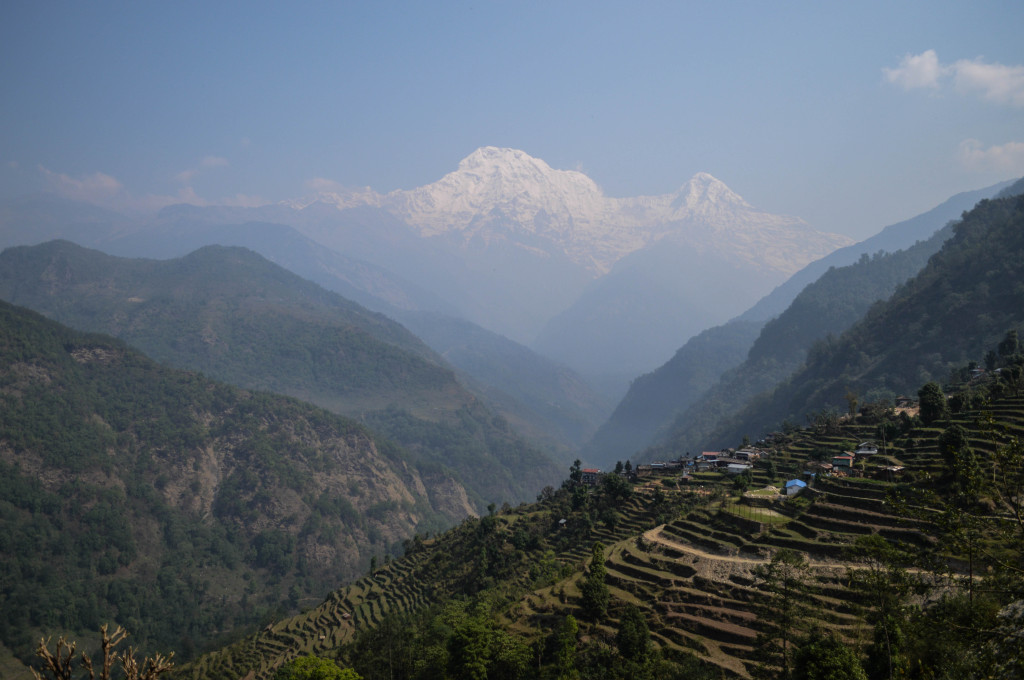 Last day in the Himalayas

It was an early start to ensure we can benefit from a cooler morning. We also wanted to make it to Pokhara before lunch time. I could not believe that my trek was coming to an end. It felt strange to see all the trekkers, who were only just starting their adventure. When I was about to complete my route in Phedi, I met a pair of young Aussies. They congratulated me and asked me if they need sleeping bags if they are planning to make it ABC. This question made me smile as I had in front of my eyes a vision of myself wrapped up in all those layers, sleeping bag and extra blankets. “It is quite cold up there so you might need it.” – I replied.

Nepali porter on the way to Annapurna Base Camp

The Ancient Paths of Priorat

Varadero – Away from the Resorts

Seville – A City Full of Character

Where to Eat in Barceloneta